The House of Various Species of Flora and Fauna

Wilderness of the Ranthambore National Park is what attracts the tourists to flock around this majestic area located in the heart of the state of Rajasthan. With the sun beating down on the forests of Ranthambore and the big cats lurking in the yellow shrubs of the landscape, Ranthambore is one place where adventure comes easy. One cannot stop but delve deep to know more about Ranthambore and its history, which is shrouded behind the curtains. Have a look:

FAUNA :
The favorable climate and vegetation abundance in Ranthambore national park gives a perfect environment for various types of animals and reptiles to exist in the park. The plethora of animals which find their home within the territories of the park are Tiger, the king of the kingdom and a majestic animal in itself, is one of the Big Cats that are spotted in the area. Other Kinds of cats that are found here include leopard, caracal, leopard cat, fishing cat, and Jungle cat. This is not it. Apart from the Big Cats, there are a large number of predators lurking in the Ranthambore, including the sloth bear, striped hyena, jackal desert fox, Palm civet, common mongoose, crocodile and python etc. The park is home to two kinds of antelopes– the Chital and Sambhar deer. Other animals which are worth mentioning are the graceful Elephants and crocodile basking in the glory of the sun. The serpent eagles soaring in the skies of the park are a treat to watch. In fact, the park houses numerous avifauna within it and thus becomes a place of heaven for bird-watchers and ornithologists. Estimates suggest that there are around 300 species of birds that are found in the areas covered by the park. Some of the species of birds which are worth mentioning are cormorant, painted spur fowl, sarus crane, Bronzed winged Jacana, sandpiper, Kingfisher, Nightjar, Painted Sandgrouse, Great horned owl and the birds which migrate to come here in the winter as their nesting grounds.

FLORA :
With the proximity to Thar Desert the vegetation type in Ranthambore is of dry deciduous type. As it is suggested there are about 300 plant species present in the Ranthambore national Park. The most prominent amongst them is the ‘Dhok’ trees which cover almost 80% of the park and are favorite diet of the Deer, Nilgai and antelopes roaming around the park. Also, the banyan tree, pipal, the neem tree, mango tree, tamarind tree, jamun tree and the Chhila tree constitute a major part of the park.

MOST POPULAR TOUR PACKAGES OF RANTHAMBORE 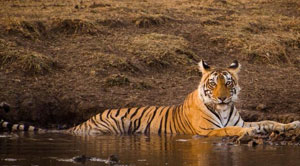 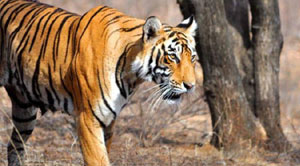 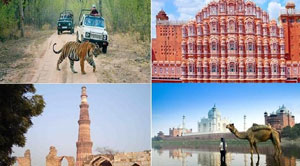 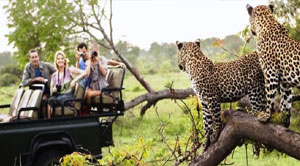 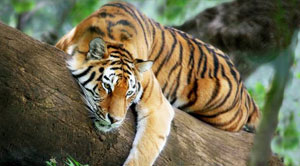 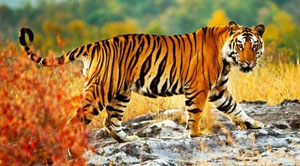 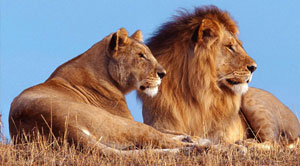 ABOUT RANTHAMBORE AND ITS TOURISM
Located in the Sawai Madhopur district of Rajasthan, this national park gets its name from the famous Ranthambore Fort, located within the territory of the park and was built by the Rajputana Kingdom, the Chauhans in particular. The Ranthambore national park, when it was established in 1955 was christened with the name ‘Sawai Madhopur Game Sanctuary’ by the Government of India. As the importance of the area grew with time, it was declared as one of the areas which would come under Tiger Reserve with the beginning of ‘Project Tiger’ in the country in 1973.

Then in 1980, it was given the status of National park and as it is known today, was called as – The Ranthambore National Park. With the ever growing success of the Project Tiger and the proficient management of the park, the adjacent forest areas of the park were also declared as protected and were given the name of Sawai Man Singh Sanctuary and Keladevi sanctuary. After this landmark, the Ranthambore National park acquired its present stature in 1991 with the inclusion of the two surrounding sanctuaries. Home to the majestic Big Cats, Ranthambore now stands tall in all its opulence, carving its niche and making a mark homing within itself a UNESCO World heritage Site (The Ranthambore Fort), staying as the best adventure location of India and all over the world.

With three well defined seasons – the summers, the winters and the monsoons, traversing through the Ranthambore is a little difficult as the maximum temperature surpasses 45°C in the months of May and June and in winters it drops down to 10°C. Thus to visit the national park it is necessary to work out a middle path. The best time to visit the Ranthambore National Park starts from 1st October and remains until 30th June. The rest of the time period the park remains closed as no visitors are allowed within the park.

The city of Agra

The city of Love known for the Wonder of The World – The Taj Mahal is located at a distance of 275kms, which is at a drive of 6hours via NH23 from Ranthambore. The city shares the glory of the Mughal Empire and not even Delhi can surpass the effect that Agra and its monuments have on the visitors. The Taj Mahal, built by Shahjahan in the fond memory of his beloved wife Mumtaz, is a testimony in the history of India that true love never dies. The Agra Fort, built in red sandstone is another magnificent structure in Agra which was built by Akbar and took 8 years to complete. The tomb of Itmad-Ud-Daula commissioned by Nurjahan is also amongst the tourist hotspots in Agra.

The wetland was artificially created by the Maharaja of Bharatpur and the place is as old as the 19th century and in 1981 attained the status of a national park. It is at a distance of 227Kms, which is a drive of about 5 hours via NH21 from the Ranthambore National Park. The Bharatpur Bird sanctuary is home to over 300 species of birds and is the most sought after place by travel enthusiasts and ornithologists. Tourists also enjoy boat ride in the early hours of the morning in this sanctuary. One of the famous phenomenons in the sanctuary is the migratory Siberian cranes which come to this sanctuary every year. Apart from the sanctuary one can also visit the Lohagarh Fort, the Government Museum and the Deeg palace.

Jaipur situated at a distance of 3 hours from the Ranthambore National park is one of the most historical cities of India. Having the sobriquet of the Pink City, Jaipur is famous for its forts and palaces. The Amer fort located on a hilltop is a structure adorned with grand gateways, courtyards, pavilions and the chamber of mirrors. Another important fort the Hawa Mahal famous for its Jharokhas or small windows is also called the Palace of Winds. The architecture of the fort allows it to stay cool even in harsh summers when the temperature outside is very high. One can also visit the Jal Mahal, a palace situated in the middle of a lake, and thus an archeological wonder. The Jantar Mantar and the city palace are also amongst the ‘must visits’ of the place